Generally speaking, IT engineers like editors; he or she will be crazy about their favourite editor.

I am an emacs user, however, I started to use Visual Studio Code (VSCode) these days.

Some call “Religious war” debates between emacs users and vi users, however, I think VSCode is much different!

Vi will be installed in most Linux computers; it is a legitimate right for engineers to use it. Default vi is not uncomfortable as well.

In the case of emacs or VSCode, probably you have to install it. Unfortunately, it is not always allowed. Your boss may not like to install unessential software to the server.

What is worse, it is annoying to use default emacs without customing. I think it is practically next to impossible to use emacs on the server.

In this meaning, vi is the best, however, VSCode is not bad if allowed. Emacs is hard a little…

Neither emacs nor vi requires GUI environment. You can use them from a remote computer through ssh login.

On the other hand, GUI is necessary for VSCode.

In this meaning, emacs and vi are superior to VSCode.

It is not common to use debugger from vi. Some debuggers, like gdb, has the interface for emacs. (This is why I prefer emacs to vi.)

In the case of VSCode, you can use much more kinds of debuggers from the editor.

In this meaning, I think VSCode is superior to emacs and vi.

It is not difficult to customize emacs or vi these days. For example, command “el-get” downloads specified emacs extension and enable to use it.

I think there are tiny differences among the editors.

You may want to see how it looks like while writing markdown, reStructuredText… and so on.

VSCode has such a function, and many extensions are for this purpose.

In this meaning, VSCode is the only choice. (This is why I started to use VSCode.)

However, I recommend using snap if you are using Debian or Ubuntu.

“/snap/bin/code” kickstarts VSCode. You may like to add “/snap/bin” to $PATH if necessary. If you are a bash user, for example, add the following setting to .bashrc.

You can start VSCode from the command line as well as GUI program launcher.

You can manage the extensions from the command line. It will help the automation setup.

The above is just an example. If you want to know more, read the help.

VSCode has too many commands and shortcuts to learn, so I recommend to remember “Ctrl + P” shortcut at first.

It calls “Go to File” command. A textbox will be open if you hit the keys. Surprisingly, you can do many things to type there as well as going to file.

Just enter ‘?’ key in the textbox and it shows the help.

According to the help, for example, ‘>’ is “Show and Run Commands”. Delete ‘?’ and enter ‘>’ in the textbox and you can see all the commands what VSCode can do. You can filter the list typing some letters.

I did not like GUI editor from my experience.

I used to write java code on eclipse about 10 years ago and the performance was a nightmare. Once code completion runs and the editor froze! (That is partly because my computer has only 512 MB RAM, which is too little even then.)

Honestly speaking, it makes slow to preview markdown or reStructuredText during writing even VSCode. I cannot stand the performance. I am writing this article in reStructuredText style on emacs and using VSCode as a previewer. 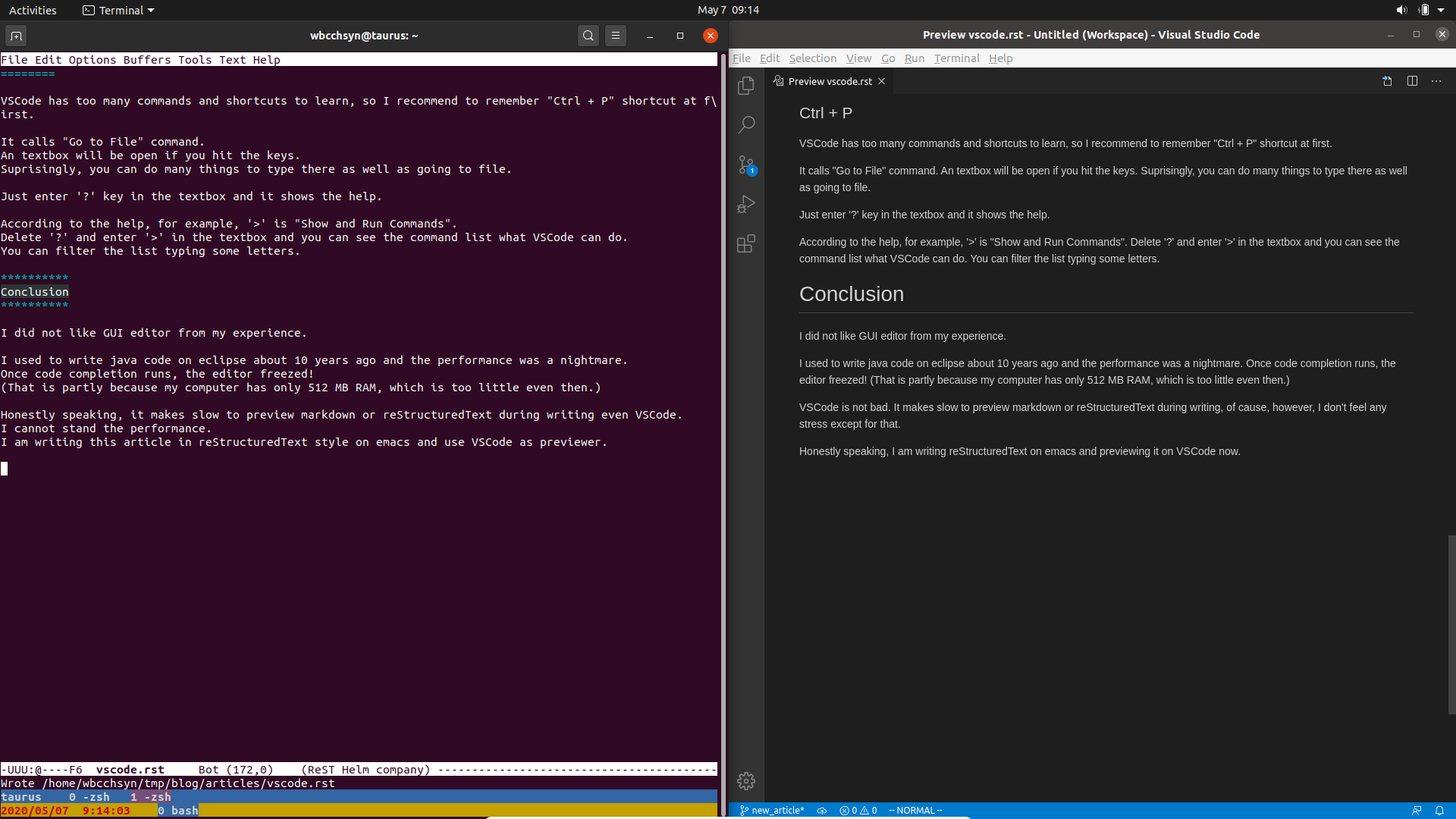 However, I do not have any other complaint so far. I will carry on for a while.

Where is the mate to the Sock?